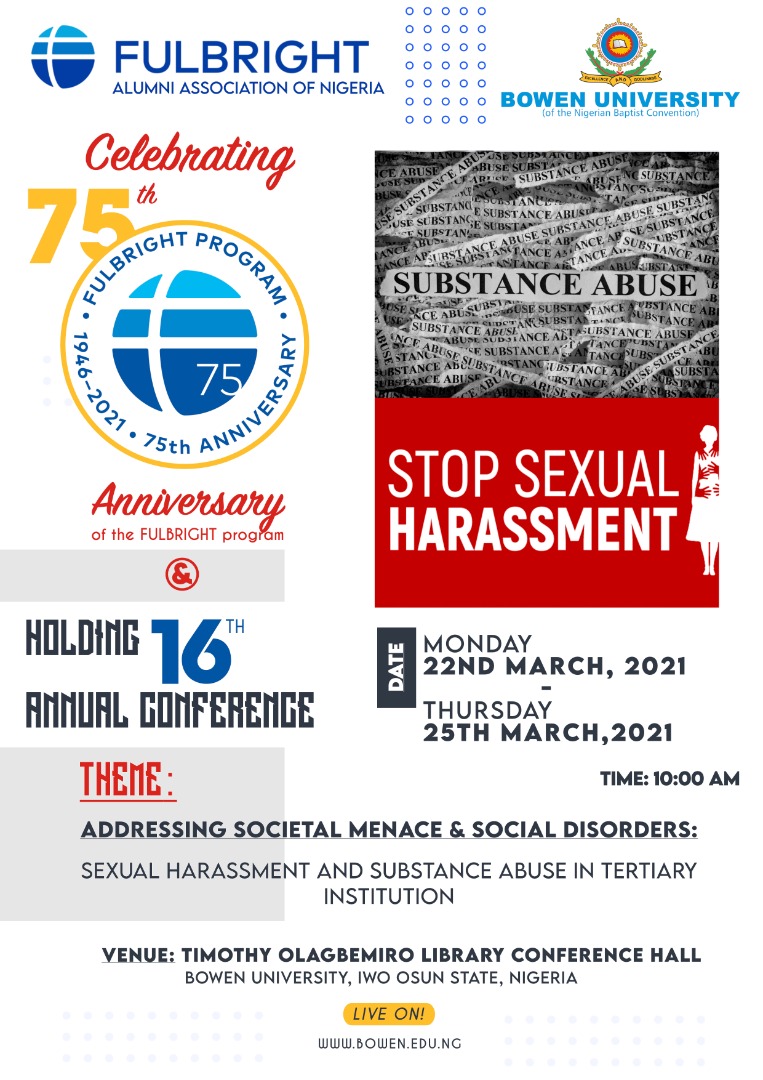 Members of the Fulbright Alumni Association Of Nigeria (FAAN) spread across the tertiary institutions and government circle in the country have converged on Bowen University campus to deliberate and develop a policy framework that would be efficient and effective enough to address the increasing rate of sexual harassment and drug abuse in the Nigerian university communities.

Speaking at the opening ceremony of the deliberation, held on Tuesday, the Vice-Chancellor of Bowen University, a fellow member of the association, Professor Joshua Ogunwole, decried the incidence of sexual harassment and drug abuse in the Nigerian tertiary institutions.

He lamented that tertiary institution a supposed training and life moulding centre for skill development, moral and character-building process, is becoming a social disorder community.

According to him, every tertiary institution should be made zero tolerance to sexual harassment and substance abuse.

We are trusting God that our findings in this conference on the courses and solutions to social disorders would be made available to the government and the general public to address the menace in the country.

Speaking in the same vein, the President of the association, Dr. Adele Garkida from Ahmadu Bello University, Zaria stated that the incidence of sexual harassment and drug abuse is worrisome, the development she said, informed the members of FAAN in Nigeria, in partnership with the United State of American government and Independent Corrupt Practices Commission,(ICPC) to discuss the courses and solutions to the problem during the 16th Annual Conference of the association.

“In light of this, at the end of the conference, we will come out with a position on how to address the challenges. FAAN concerns itself in the transforming process of the Nigerian universities,” she said.

Similarly, Mr Adenekan Shogunle, who represented ICPC in the programme, described the theme of the conference as a welcome development in the history of tertiary institutions in the country.

He said that sexual harassment and drug abuse should not be allowed to thrive in the tertiary institutions, which he said called for the need to deliberate on how to curb the crime in the university system.

Professor Kayode Soremekun, a Fulbright Fellow and former Vice-Chancellor Federal University, Oye- Ekiti and Vice President of the association, Professor Francis Nwosu asserted that the societal menace and social disorders in the Nigerian tertiary institutions is a spillover from the general society and bad governance and that a policy must be developed to address the menace.

According to them, there would be a need for public awareness and orientation in all the tertiary institution communities to stem the tide of the menace.

According to him, the theme of the conference is necessary to sanitise the university system in Nigeria. He added that the Embassy would continue to support the association’s laudable programmes in the country.