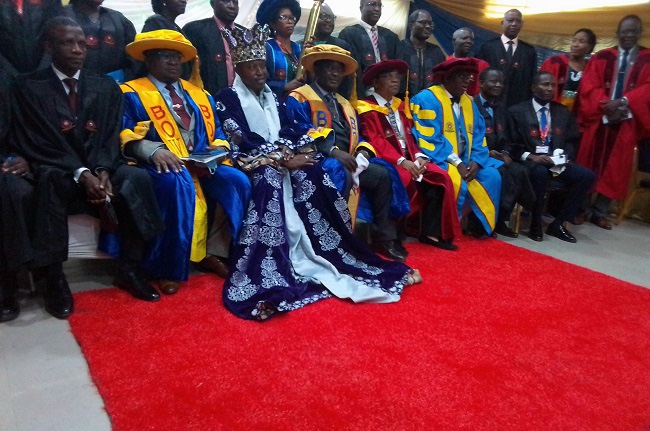 The Vice-Chancellor, Bowen University, Iwo, Professor Joshua Ogunwole has said that entrepreneurial education should surpass skill acquisition of shoemaking, tie-dye and other related vocations in the university.

Speaking at a lecture delivered by Professor Adebisi Adebowale, which was organized by the university, scheduled to mark the 20th anniversary of the institution held recently, Professor Ogunwole declared that an ideal entrepreneurial education for undergraduates should be more of digital education and soft skills empowerment.

According to him, entrepreneurial education at Bowen University, designed for undergraduates across all the colleges in the institution, is technological driven, which he said has made the Bowen graduates be self-sufficient and relevant in this 21st-century technological world. He added that skill acquisition of shoemaking, tie-dye and other related vocations should be meant for college of education students and not for university undergraduates.

The Vice-Chancellor in his address at the occasion, also, reemphasised that no private university that uses a public university’s template to run its academic and administrative programmes would survive in an ideal university system.

He noted that university education in this 21st century does not support the traditional /conventional method of managing the university system by reason of its failure to prepare students for tomorrow’s needs in society.

He said: “ At Bowen University, we deploy technology to execute academic and administrative activities, while our entrepreneur education is majorly in the area of digital and soft skill education.

“To meet the world-class standard, we are investing more in technology development, such that our entrance examination will be internet facilitated.

“In this regard, candidates can write our entrance examination at home, as we put in place online effective invigilators that will control examination malpractices while the examination last.

“Moreover, as an effort to cut away from the conventional curriculum, we are consolidating our technology endowment for professors in Diaspora to teach in Bowen University right from their various universities abroad.

“If we want to survive in the next generation to come, we must be at the cutting edge of the latest technologies for teaching and research in order to move the university forward.”

Speaking about the university community service to its neighbouring and host community, Professor Ogunwole assured the royal fathers that the university has put in place strategies to boost the economy of the cities soonest.

The visitor to the university and President, Nigerian Baptist Convention, Rev, Dr Israel Akanji, eulogized the Vice-Chancellor, Professor Ogunwole and his team for their efforts to move the university forward. He assured the university of the readiness of the convention to support the institution financially.

The Oluwo of Iwo land, His Majesty, Oba Abdul- Rasheed Telu 1, pledged his supports towards the physical expansion of the university in the city. He expressed satisfaction with the policy and management style of the present leadership of the university.

He asserted that Bowen University is a blessing not only to Iwo community but also to Nigeria as a whole.

According to him, Iwo has enough land for Bowen’s expansion. He promised to protect the interest of the university in the town, as he added that his palace would appreciate a mutual relationship between the office of the Vice-Chancellor and the Iwo community.

Speaking in retrospect while delivering the20th anniversary lecture of the institution, former Chancellor and Chairman, Governing Council of the university, Professor Adebisi Adebowale, attributed the 20 years of existence of Bowen University to successive good leaderships of the institution who were able to build on the solid foundation upon which the institution was established in 2001.

He noted that the university’s wide curriculum, known as Godliness, Excellence and leadership has been the driving force that kept the Bowen university functioning to be at par with other first-class universities not only in Nigeria but also in other parts of the world.

He then appealed to the present administration not to rent in their efforts to project the university to a greater height even at the global level, as they maintain and upgrade the core value of the university.