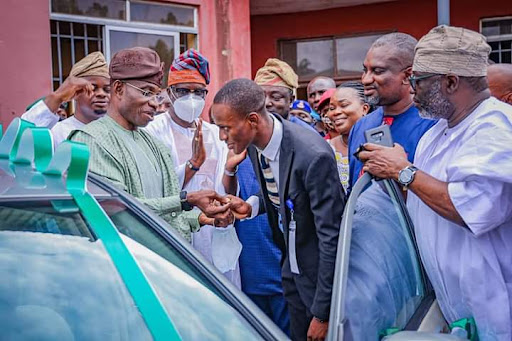 It was another celebration galore at Bowen University, Iwo, Osun State, when the principal officers of the institution and academic staff led by the Vice-Chancellor of the university, Professor Joshua Ogunwole assembled to honour Master Victor Adeyemo, a 400L student at the College of Health Sciences of the institution, who won this year’s Osun State Annual Independence Essay Competition, organized for all tertiary institutions in the country, held recently. Master Victor Adeyemo, a 400L Medicine and Surgery, won a brand new Toyota car as the overall best applicant in the competition.

Speaking at the celebration ceremony held on Tuesday at the university’s Library, the Vice-Chancellor eulogised the organizers, Osun State Government, under the administration of governor Gboyega Oyetola for such an excellent promoting and educational extra-curriculum programme in the state-organized for students in the country.

According to him, it is a welcoming development in the history of education in Nigeria, as it will promote academic excellence among the youths, boost and build their capacity, as well as motivate them to become somebody in life. In this direction, he said the Osun State government is thus putting money into projects and programmes that would build the future of Nigerian youths especially in the areas of science and technology.

He said: ”Today, we are celebrating another student of ours, Victor Adeyemo, who has joined other brilliant undergraduates of the university to make the institution proud in the academic world outside the university system. In the last three years, we have been in the vanguard of promoting academic excellence in the extra curriculum academic activities on the campus. Many of our undergraduates have won several academic awards and grant-aid in the last three years. We are boast of experienced human personnel, teaching and research capacities to produce sound mind graduates that can influence their immediate environments positively. Bowen University is a great centre of excellence where leaders are being trained, leaders, who will be Godly and be willing to pursue excellence at all times. Public Speaking is a compulsory course for all our undergraduates.”

“ The university is empowering its new award winner, a sum of 150 thousand naira in recognition of his excellent performance in the just concluded national essay competition organized by Osun State government. The money is meant for his capacity building for subsequent competitions ahead of him, at local and international. Levels,”.

While responding, the awardee, Adeyemo attributed his success to God and the quality of education the university exposed its students to. He thanked the university for recognizing his achievement, as he also expressed appreciation for the cash award.

He said. The workforce and the leadership of Bowen University culminated by the 21st century educational, skill and developmental training we enjoy on the campus are attributable to students’ performance at any level. We can compete with our peers at the global level, even in health science education.

“I learnt that we were not less than 702 applicants that enrolled for the competition for the essay national competition based on a topic; Unveiling the security architecture and daunting challenges in all the geopolitical zones of Nigeria and proffer workable solutions towards a peaceful, sustainable and indivisible Nigeria. The competition was in three stages, but God saw me through. Bowen taught me to be vast in knowledge. Though I am a medical undergraduate, the university exposes me to know something about everything. This is another secret of Bowen students’ academic success.